I grew up swimming in the Indian Ocean, by far the most kindly of the three. The Atlantic Ocean is just naturally scary, of course, full of blue whales and black water. Ice floes. That episode of Blue Planet, in which the killer whales (“the wolves of the sea”) chased down the little baby blue whale, just swam it into exhaustion and separated it from its mom and ate it up. The words “sea witch”. The words “fishing grounds”. Poems in which women do that kind of screaming which is called “keening” and weave mourning shawls out of seaweed and throw themselves off a cliff and into the arms of their dead lover, lost all these many years ago to the deep. An article I once read about The Perfect Storm, in which everyone died, and which included the following sentences:  “Swordfishermen seldom eat swordfish when they’re out. Like many ocean fish, it’s often full of sea worms, four feet long and thick as pencils…” Four feet long. Thick as pencils. Many ocean fish. The whole thing is just completely out of line.

The Pacific Ocean is tidal waves and box jellyfish. A tiny kind of octopus I heard about that has a completely unnecessary amount of poison in it. Did you know that when an octopus has a mouth, you don’t call it a mouth – you call it a beak. A beak. The Pacific Ocean is everyone sitting on the beach taking it easy, and suddenly they hear a noise like a train and the water is pulling right back, there are suddenly miles of coral exposed to the air, the tiny poisonous octopuses are gasping for breath, opening and closing their beaks, and then a wave is on top of everyone as big as a house.

The Indian Ocean, in contrast, is a good time had by all. What’s in the Indian Ocean? Dolphins. A small child learning how to surf. Not even a lot of seaweed.  The Indian Ocean is when you go for a swim and it’s really great. Here is a dog, swimming out to greet you! Her name is Daisy, and she is raking her claws down your sides a bit too much, but this is a minor complaint. Nothing bad can happen to you in the Indian Ocean, or so I was raised to believe. My dad said it a lot, when I was a kid. It was his way of encouraging me not to be scared of big waves. He’d gesture out towards the water and say I want you to know that there is nothing in the sea that will ever hurt you. I believed him. I learned, in the sea, to conduct myself in an uncharacteristically fearless way.

I swam a lot in the Indian Ocean, this summer. Nearly every day. I swam out to the shark nets and back, and remembered what it feels like to dive right down under a big wave, and feel the water wanting to pull you over with it. On three different occasions, I felt so happy that I screamed, the way a very small kid does in the presence of water.

It’s funny, though, swimming alone. Sometimes a person cannot help but get the creeps. I didn’t worry about drowning, exactly, or about proper sharks, but there would be times when I’d be very far out, alone, and suddenly find myself with the jitters. Just all that big ocean all around, and God knows what circling underneath me with its mouth open. I wasn’t scared of a particular thing happening, exactly, but it would happen sometimes that my legs would go a bit fizzy and worried. The fear, which I would not say clearly to myself, could be expressed only as What if something happens to freak me out? That’s as far as I would allow myself to go. If I actually  said What if a shark eats me or What if a manta ray pierces me in the heart, then I wouldn’t be able to swim alone anymore, and then thing that makes me happiest probably in the world would no longer be a part of my life. This is how I have always dealt with my fears: by not articulating them.

A weird thing happened. Someone told me a story about a shark that had been found in front of the nets. Name: milk shark. Now. “Milk shark” does not sound scary, exactly, but I wished very much I hadn’t been told that story. I tried to put it out of my head. I didn’t do what a person would usually do, which is to google “milk shark” and see that is utterly harmless. I refused to look it up in case it turned out that a milk shark was one of the lesser-known wolves of the sea.

I carried the milk shark information around with me, although I tried hard to forget it. It happened that one evening I went for a very long swim, and came down with a serious case of the milk shark blues. I suddenly knew it was underneath me, a baby blue whale tied to its tail like a trophy, just waiting to eat me. Don’t freak out, I said to myself. Remember. There is nothing in the sea that can ever, ever hurt you. I talked myself down. I told myself I was an idiot.

Then. A fin. Not two metres in front of me. A big fucking fin coming out the water. Yes. Of course my heart hurled itself into my throat, and of course I thought I was going to die this time for real. The next thing I did was very weird: I told myself that I didn’t see it. I told myself that I was an idiot, again. No fin, I told myself. That didn’t just happen.

I swam for another twenty minutes or so, and went back in. I forgot about the fin. I went and found my dad, and we stood on the edge of the water and watched Daisy be too boisterous and chatty for some dogs, but fine for others. The sky was all pink, and it really was an almost unsettlingly beautiful evening. I turned to say so to my dad, but then I looked at the sea and there was the fin again. And then two fins. And then a whole family of dolphins right there in front of us, much closer to the shore than I have ever seen before.

There are a few conclusions to be drawn from this, one of which is that for a person who has spent so much time in the sea, you would think I’d know the difference between a shark fin and the fin of a happy dolphin. This is easy to fix, though. I’ll work on it. The other thing I need to work on, apparently, is harder to fix. The point of this story is that I would rather disbelieve the evidence of my own senses than be scared. This applies, I think, to contexts other than the sea in Durban, and to people other than me. The world is an extremely scary place, and a lot of us have, I think, developed a kind of selective blindness in order to deal with this. We ignore things. We tell ourselves it’s fine. We tell ourselves it’s nothing. 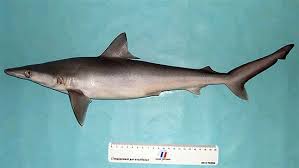 Filed Under: An Essay A Week, Uncategorized